Investigators said a 16-year old Cassopolis girl lost control of her car while driving eastbound and came upon a patch of ice. Her vehicle crossed the center line and struck the side of a westbound box truck driven by 53-year-old Anthony Falcone of Elkhart.

A 17-year-old passenger from Cassopolis was in the car and transported to Borgess Lee Hospital.

Seatbelts were in use and alcohol does not appear to be factor, though investigators said speed could have played a part in the incident. 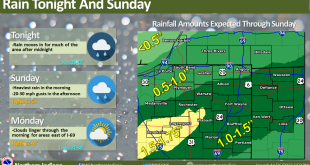