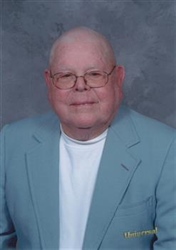 He worked as a Paper Mill Supervisor for Weyerhaeuser Corporation for over 40 years. He enjoyed golfing at Sauganash Golf Course and bowling.  In his spare time Howard loved to cane chairs.  He was a longtime member of St. Peter’s Lutheran Church and the Three Rivers American Legion Post #170. Most of all Howard loved his family especially his grand, great-grand, and great great-grandchildren

Howard was preceded in death by his wife Alberta Hay, four brothers: Richard, Allen, Roland, and Robert, and one granddaughter Janet Craig.

Howard’s services will be held at Hohner Funeral Home on Saturday, January 6th, 2018 with visitation starting at 11:00 a.m. followed by a 1:00 p.m. funeral service with Pastor Robert Bartz officiating.

Memorial Donations made in Howard’s memory may be made to St. Peter’s Lutheran Church. Envelopes available at the funeral home.