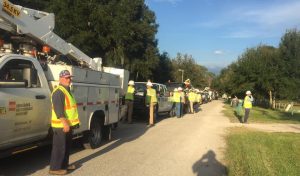 Most of those employees were line workers and foresters.

The award is presented to EEI member companies to recognize exceptional response helping other electric companies in power restoration efforts after service has been disrupted due to severe weather conditions or other natural events. The winners were chosen by a panel of judges following an international nomination process, and the awards were presented during EEI’s Winter Meeting in Arizona last week.

The process of how St. Joseph County will administer $1 million of its American Rescue …