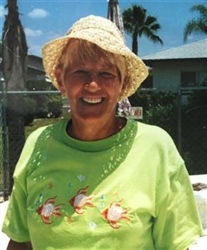 Mrs. Judith Ann Mrosewske, age 75, of Three Rivers and Constantine, passed away peacefully on Sunday, January 7th, 2018 at the home of her daughter surrounded by her loving family.  She was born in Detroit on Feb. 3rd, 1942 the daughter of the late Stephan and Ruth (Hoffman) Nabozny.

On September 30, 1961 Judy was united in marriage to her beloved husband William Mrosewske.  Together they raised three children and eventually moved to the Mio, MI. area.  Judith’s true love and delight were spending time with her family, especially her grandchildren and great-grandson.

Judy was preceded in death by her parents, and one son, Roy Mrosewske.

A celebration of Judy’s life will take place at 2:00 p.m. on Wednesday, January 10, 2018 at the Hohner Funeral Home with Pastor Mike Elkins officiating.

Memorial donations in memory of Judith may be donated to the Three Rivers Health Hospice or the Alzheimer’s Association.  Envelopes available at the funeral home.

The family would like to extend a special note of thanks to all who cared for Judith during her time of illness.