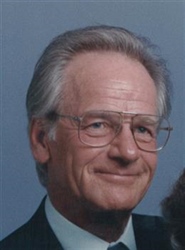 Robert John Fotis, age 84, of Three Rivers, passed away suddenly on Sunday, January 28, 2018 at Three Rivers Health. He was born in Muskegon on February 6, 1933 the son of Frank and Olga (Kurant) Fotis, Sr.

Bob was a resident of Muskegon until moving to Three Rivers in 2016. He served his country in the U.S. Navy until his honorable discharge in 1953. On May 22, 1954 he was united in marriage to Barbara Longnecker. Together they raised four children, Mark, Mitchell, Susan, and Sherry Fotis. Bob was employed by the Sheet Metal Union Local #7 where he worked as a journeyman and salesman for almost 40 years before his retirement. He enjoyed golfing, fishing, traveling, and spending time with his family and friends.

Memorial Services will be held at 11:00 a.m. on Friday, February 2, 2018 at Hohner Funeral Home with Fr. Antony Rajesh officiating.

Memorial donations may be directed to Big Brothers Big Sisters, A Community of Caring, 3501 Convington Rd, Kalamazoo, MI 49001. Envelopes available at Hohner Funeral Home in care of arrangements. Online condolences may be shared for the family at www.hohnerfh.com.