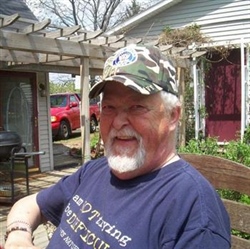 Thomas Woodrow Brothers, Sr. passed away peacefully in his sleep at his beloved home on Sand Lake, surrounded by cherished friends and family on Friday, January 26, 2018. He was 74 years old and lived a full and interesting life of adventure and joy with people he loved dearly.

Born on January 10, 1944 in Sturgis to Ishmael C. & Lottie V. (Marshall) Brothers, Tom spent his childhood fostering a love for cooking after conquering a severe bout with tuberculosis at a young age.  He cultivated a strong will, compassion for others and a robust sense of self that served him well throughout his life.

During high school, Tom was recognized as a valuable member of DeMolay International, a fraternal organization whose mission is to uphold the 7 Cardinal Virtues of Filial Love, Reverence for Sacred Things, Courtesy, Comradeship, Fidelity, Cleanness & Patriotism. He was also an active player for the Sturgis High School Trojan football team and enjoyed cruising and racing performance cars. He held his first job at age 14 and dutifully saved to buy his first two cars before graduating high school.

Tom enlisted in the United States Navy in 1965 and served as Electronics Technician and Radar Operator Second Class with the VP-9 squadron stationed at NAS Moffett Field in San Jose, California. He travelled the world proudly serving his country for 4 years.

Following his honorable discharge from the Navy, Tom was employed as a civilian contractor in the San Francisco area. He then returned to Michigan to care for his aging parents and worked as a Purchasing Agent for several area businesses.  He met the love of his life shortly after his return, and married Bernadine Luaine Bocook (“Bernie”) on  March 27, 1971 in Kalamazoo.

Tom returned to his passion for cooking and bravely changed careers in the early 80s, instilling in his children the importance of following one’s dreams. After honing his craft at a variety of well-known establishments in Southwest Michigan, Tom & Bernie bought and operated their own restaurant in Three Rivers named Fisher Lake Landing where he was best known for making delicious prime rib and seafood dinners.  He also shared his culinary talents at many other area restaurants and clubs.

After the children went on to establish their own lives, Tom & Bernie poured their hearts and souls into renovating an old cottage on Sand Lake in Nottawa. With the help of friends & family, they turned the dilapidated old house into a glorious, warm and magical home where everyone who entered felt loved. Tom found great joy in helping to raise his three grandsons and spent countless hours teaching them to cook, fish, swim and drive while simultaneously instilling the values of kindness, good humor and fiscal responsibility.

Memorial arrangements will be announced by the family at a later date.

In lieu of flowers, donations may be made to Three Rivers Hospice or The Animal Rescue Fund of St Joseph County in honor of Tom’s well-lived life. Envelopes available at Hohner Funeral Home.