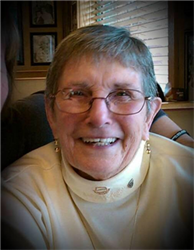 Veronica Marie Hornblower, age 86, passed away Sunday, January 7th, 2018 at her home in Three Rivers, Michigan. She was born November 10, 1931 the daughter of Thomas and Margaret Watts in London, England.

In 1953 Veronica was united in marriage to her beloved husband William Hornblower. Together they raised six children living in multiple locations, eventually settling down in Three Rivers in 1971. She worked many years in food service for Three Rivers Public Schools.

Veronica was preceded in death by her parents and her loving husband, William Hornblower.