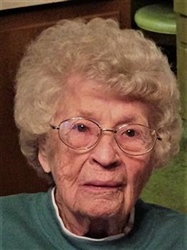 Elizabeth Helen (Betty) Lambertson passed away at the age of 100 on Monday, February 19, 2018 at her home in Three Rivers.  She was born in Three Rivers to Adam and Margaret Armstrong. Betty attended schools in Three Rivers, The Southern Seminary in Virginia, and she graduated from the University of Michigan where she was a member of Alpha Omicron Pi Sorority.

On May 9, 1942, she married Howard G. Lambertson.  When WWII was over and Howard came home they bought a resort on Houghton Lake, Michigan.  They ran the resort in the summers until 1952 when they moved back to Three Rivers permanently.

Betty was a member of the First Presbyterian Church, Elks Club and Sauganash Country Club.  She also volunteered for many years at the Three Rivers Area Hospital in the snack shop.

Betty was preceded in death by her parents, a brother Lawrence, a sister Margaret, and her husband.

Betty loved her family, her church, her many friends, her cottage in the Upper Peninsula, and Three Rivers. She was loyal to her teams, the Lions, Tigers, and Wolverines.

The family plans a memorial service at the Presbyterian Church in May.  The family also wants to thank the many caregivers from Absolute Home Health Care that lovingly took care of Betty for the past 14 years.

Memorial donations may be directed to the St. Joseph County United Way or Three Rivers Area Hospital.  Envelopes available and may be sent to Hohner Funeral Home in care of arrangements.

Online condolences may be left at www.hohnerfh.com.