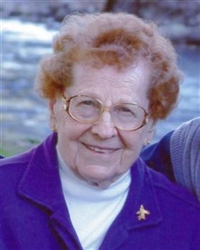 Mrs. Mary Kathryn “Star” Hasbrouck, age 90, of Three Rivers, passed away peacefully on Sunday, February 18, 2018 at the Bowman House where she resided. Mary was born on Nov. 1, 1927 in Three Rivers, the daughter of the late George Starzevski and Mary (Ohota) Starzevski.

Mrs. Hasbrouck attended Three Rivers Schools and graduated with the class of 1945. She married the love of her life Mr. Robert W. Hasbrouck, whom preceded her in death, on April 29, 1950 and together they made their home in Three Rivers where Kathryn worked as the supervisor of the billing dept. at Michigan Power Company (now Semco) for many years. She was an avid and faithful member of the American Legion Auxiliary where she served as Past President and also the Three Rivers #2303 Eagles Auxiliary.

Kathryn was preceded in death by her husband Robert W.; three sisters, Helen, Lodgia, and Alice, and one brother, Joseph Starzevski.

A mass of celebration will be held 11:00 a.m. on Thursday, Feb. 22, 2018 at the Hohner Funeral Home with Deacon Mike McCloskey as celebrant.  Interment will be held in Riverside Cemetery.

Memorials may be donated to the American Legion Auxiliary or the Three Rivers Library. Envelopes available at the funeral home.