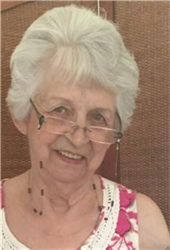 Judy was a high school graduate in Chinook, MT in 1953. Judy was employed as a secretary for the Hill County Courthouse and later worked as a clerk for many years at K-Mart where she retired.  She was united in marriage to Guy Henry Smith and together they eventually made Three Rivers their home. Following her retirement, Judy helped her daughter Leslie at the L.A. Coffee Café for many years as the head baker and cook.  Judy’s passion and talent for baking was the trademark recipe for their business. She was wonderfully skilled and put tremendous thought and love into all of her desserts and meals she prepared. She also enjoyed quilting and crocheting afghans for her friends and family.

Judy was preceded in passing by her parents, stepfather, Arthur Burns, and husband, Guy H. Smith in 2015.

The family will receive friends from 11:00 until 1:00 p.m.at Hohner Funeral Home on Monday, April 2, 2018.  Graveside services to follow at Riverside Cemetery, Three Rivers.

Memorial donations may be directed to Howardsville Christian School.  Envelopes available at Hohner Funeral Home in care of arrangements.