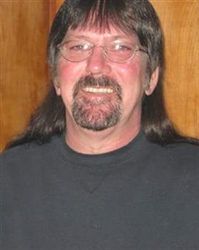 Ricky Gene Smithers, age 58, of Three Rivers, passed away peacefully in his home on Monday, March 12, 2018 surrounded by his loving family. He was born on March 14, 1959 in Coalinga, California the son of William and Hazel (Travis) Smithers.

In June of 21, 2002 he was united in holy matrimony to Jenni Davis. He was employed by Head Start, as a bus driver, for 20 plus years, the city of Three Rivers, and spent his later years working as a maintenance worker for Medallion Management. Rick enjoyed spending time with his family, the holidays, especially Halloween, and a cold beer in the evening.

Ricky was preceded in death by his parents and his brother Bill Smithers.

A celebration of Ricky’s life will be held at Hohner Funeral Home on Friday, March 16, 2018 at 11:00 a.m. with Pastor Brian Lutz officiating. Interment at Riverside Cemetery to follow.

Memorial donations may be donated to the family in c/o of Jennifer Smithers. Envelopes are available at the funeral home.