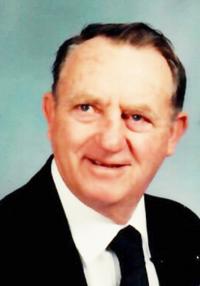 Carl L. Timm, age 89, passed away peacefully in his home on Wednesday, April 4, 2018. He was born on Sept. 7, 1928 to Carl and Jennie (Lempke) Timm at 721 South Hooker Avenue in Three Rivers.
In high school, “Timmber Timm” set the school basketball scoring record in 1947. In track and field, he was a regional champion in high jump in 1946 and 1947, and at state finished third in 1946 and fourth in 1947. A 1947 graduate of Three Rivers High School and an outstanding athlete in football, basketball, and track and field, he was inducted into the Three Rivers Athletic Hall of Fame in 2005.
He married his high school sweetheart, Elaine Maystead, on Oct. 17, 1948. They resided in Three Rivers all their lives. Carl quickly took up the brick mason trade. There is hardly a brick and mortar his hand did not touch on any local school, bank, factory, hospital, or church. Carl was always hard working. After working all day, he would come home to eat dinner with his family and then worked on his own house he was building, or a chimney or fireplace that someone had asked him to build for them. He did quality work and always took pride in his work. A child growing up during World War II and the depression era, in a small house with his parents and five sisters, he knew the value of what is important in life — God and Family.
There was no greater honor of pleasure for Carl than providing for his family. A man of faith, strength, courage, integrity and unconditional love, he has let and amazing legacy for his children. He enjoyed family vacations, family gatherings, deer hunting, turkey, duck and goose hunting, and fishing. He was a member of Bricklayers and Allied Craftworkers Union for 63 years.
Carl is survived by his children, Randy (and William) Shearer of Foley, Ala., Steve (and Marie) Timm of Bend, Ore., Jeff (and Pam) Timm of Sturgis, and Tammie (and Steve) Rank of Centreville; sisters, Ruth Schweihs of Rochester, Minn., and Kathryn Reick of Three Rivers, 10 grandchildren, 10 great-grandchildren, and several nieces and nephews.
Carl was preceded in death by his parents, his wife of 69 years Elaine, and his sisters Mary Miller, Wilma Sands and Lucile Miller.
The family will receive friends Monday, April 9, 2018 from 10 a.m. to noon at the Eickhoff, Farrand, Halverson Chapel in Three Rivers, with services beginning at noon with Pastor John Booko officiating. Condolences may be expressed to the family online at www.efhchapel.com