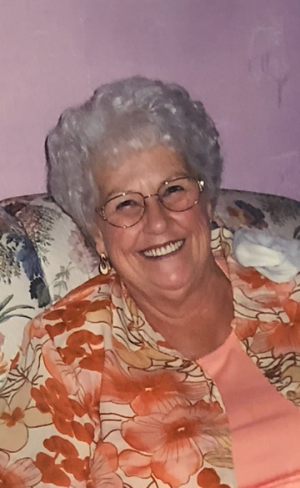 Norma Adamson entered heavens gates April 5, 2018 with her daughter Rita holding her hand.  Norma was born Dec 31, 1930 to Clarence and Adalene Thomason in Marion, Ind.  She married Lewis Adamson Dec 24, 1948.  They moved their family to Three Rivers, in 1963.  She worked at Reish’s Shoe Store until they closed in 1989.   The Reish family became her second family!  Norma had many hobbies, quilting, knitting, crocheting, painting, which she passed on to her children and grandchildren.  She loved working with the public and she had a smile for everyone she met.  Norma and Lew spent winters in Naples, Fla in 1994 until Lew’s death in 2016, where they became very involved in their park and met many special friends. Norma attended Bethany Chapel in Three Rivers and Isle of Capri Community Church in Florida  where she had many friends. She was a prayer warrior and held up her family and friends in prayer.  Norma is survived by three children Debra (Len) Max of Three Rivers, Lewis (Ginger) Adamson of South Haven, and Rita (Chris) Szweda of Vandalia.  Six grandchildren Lori McColley (John Swendender), Derek (Katie) Max, Jennifer Napieralski, Brad (Casey) Adamson, Ashley (Eric) Stoffl and Melissa (Paul) Hovarth. 14 great grandchildren, which were her pride and joy. One brother Arthur (Nona) Thomason and three sisters, Glenna Biven, Gail Lawson and Kay (Bob) Mauller.  Sister-in law Ann Squires.  Special friends Buck and Rosemarie Starks, Gary and Jennifer Reish.  She was preceded in death by her parents, her husband Lewis, grandson, Michael Adamson, two brothers Marvin and Wayne Thomason, sister-in law Barb Thomason, and brother-in law Albert Lawson.   Norma is not gone, she has moved to her heavenly home and will one day be reunited with all of those who have accepted her savior. The family will receive friends from 10:30 a.m. until time of memorial services beginning at 11:00 a.m. on Saturday, May 12, 2018 at Bethany Chapel, 15130 Millard Rd, Three Rivers, MI 49093. Memorials will be directed to Bethany Chapel in Three Rivers, MI in care of Pastor Tim Moore. Envelopes available at Hohner Funeral Home in care of arrangements. Online condolences may be left at www.hohnerfh.com.