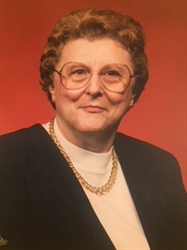 Marian L. Speece went home peacefully at Heartland Health Care Center on Friday, May 18, 2018 in Three Rivers, at the age 92.  She was born on November 17, 1925 in Three Rivers to Kenneth and Claudia (Bingaman) VanOver.  On June 28, 1946, in Burlington, Michigan, she married Lawrence E. Speece who preceded her in death on June 14, 1986, just two weeks shy of their 40th wedding anniversary.  Marian and Lawrence moved their family from Three Rivers to Schoolcraft in 1959 where she happily and independently remained in their home on South Cedar Street until entering Heartland.

Marian worked as a quality assurance inspector for Arco Industries Corporation in Schoolcraft before retiring after more than 30 years of service.  Marian was active in retirement and continued to work part-time for several years at the Greater Kalamazoo Auto Auction, also in Schoolcraft.

Marian never met a stranger, had a wonderfully infectious laugh and loved her family.  She enjoyed playing cards, cooking for her family and fiercely asserting her independence.  From summer vacations at Bankson Lake, Fourth of July celebrations, Sunday dinners, hands of penny poker, working the Ouija Board or floating a table or two in mid-air, Marian created a lifetime of unforgettable memories with and for her family.

In addition to her husband, Lawrence, Marian was preceded in death by her parents; a daughter, Linda Speece Simkins; grandson, Scott Speece; sister, Katherine Wagner; and brothers, Lawrence (Buck) VanOver and Paul VanOver.

A celebration of life will be held on Tuesday, May 22, 2018 at Hohner Funeral Home, 1004 Arnold St., Three Rivers, with Pastor Brian Lutz officiating.  Visitation will take place from 12:00 p.m. to 2:00 p.m. with a graveside service to follow at Schoolcraft Cemetery.

Memorial contributions may be made in Marian’s memory to the Alzheimer’s Foundation of America. Envelopes are available at the funeral home.