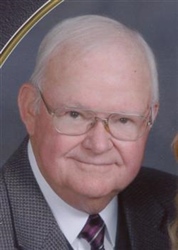 Norman James Rivers, age 87, of Three Rivers, passed away on Friday, April 27th, 2018 at the Rose Arbor Hospice Center.  Norm was born on February 15, 1931 in Detroit, the son of the late John F. and Lillian (Stainsby) Rivers.

Norm graduated from Cooley High School, Detroit, in 1949 where he lettered in baseball and football and was a golden gloves boxing champion. Norm played shortstop on the American Legion Baseball Championship Team in 1948. He furthered his education at Wayne State University. He was a certified Life Insurance Underwriter (LUTC), Certified National Association Stock Dealers, and held several American Management Association Certificates.

Norm served his country in the U.S. Naval Reserves and the U.S. Army during the Korean War where he was a heavy weapons instructor at Fort Riley, KS, and also participated in A-Bomb tests, in Yucca Flats, Nevada in 1953.

He was also active in community service of Three Rivers.  He served as Chairman on the Airport Advisory Board and Planning Commission during the late 1970’s. He was elected City Commissioner in 1980 and Mayor of Three Rivers in 1981 and City Commissioner again in 1996. He was a member of the Three Rivers Chamber of Commerce for twenty five years , Three Rivers Rotary for over forty years, and the First Presbyterian Church since 1974 where he taught Sunday School and served as Deacon and Elder.  Norm made a run for Congress for the U.S. House of Representatives for Michigan in 1988.

The family will receive friends from 12-noon until time of funeral services beginning at 1:00 p.m. on Sunday, May 6, 2018 at First Presbyterian Church, 320 N. Main St, Three Rivers, with Rev. Brenda Deily officiating.  A luncheon will follow the service at the Church. Cremation and interment will be at a later date.

Memorial donations may be directed to Rose Arbor Hospice Center.