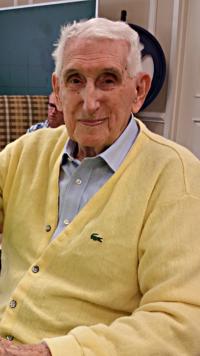 William Irl “Bill” Martin passed away peacefully on Sunday, May 20, 2018. He was born in Marshall County, WV on July 8, 1923 to Irl William and Virginia K. Travis Martin.
Bill married his high school sweetheart, Garnet Amelia Sole on December 24, 1941, in Shadyside, Ohio. She preceded him in death in 2011. Bill was a WWII Veteran, serving in the Navy aboard the U.S.S. Memphis from 1942 until his honorable discharge in 1945. After his military service, Bill settled his family in Michigan, eventually moving to Ford Lake (Ypsilanti) where his family grew to seven children. Bill worked for the Ford Motor Company. He and Garnet provided a wholesome country home where the family could thrive. They created wonderful memories of swimming, boating, horseback riding, archery, camping and ice skating. In 1967, with three children still at home, Bill and Garnet left Ypsilanti to become House Parents at a children’s home in Indiana, where they cared for ten orphans. Later, Bill and Garnet moved to Wyoming to be near their eldest daughter and her family. From this base Bill and Garnet spent many winters on the road, working with RVICS (Roving Volunteers in Christ’s Service), a group of retirees who would caravan to various church camps throughout the southwestern states, doing small repairs and construction projects. This occupied many years until they moved back to Michigan to be close to their children and grandchildren here. Bill’s family would describe him as outgoing, enthusiastic and joyful. His grandchildren remember him as a Scoutmaster, Sunday school teacher, basketball coach and fishing companion. They enjoyed his company. Bill also had a lifelong passion for the game of golf. Left to cherish his memory are his children Marguerite (Richard) Remington, Leesburg, FL. James (Rory) Martin, Prescott Valley, AZ. Nancy (Kit) Moran, Milan, MI. Linda (Paul) Rosser, Manchester, MI. Patricia Tyson, Crawfordsville, IN. Scott Martin and Kimberly Blanchard, Three Rivers, MI. And Elizabeth Norris, Milan, MI. Bill and Garnet had 16 grandchildren, 30 great-grandchildren, and 9 great-great-grandchildren. Bill is also survived by his sister-in-law Gertrude Stewart, Elkhart, IN and many nieces and nephews who will miss him greatly. A celebration of Bill’s life will be scheduled at a later date. To leave a memory you have of Bill, to sign his guestbook, or for more information please visit www.rbfhsaline.com.