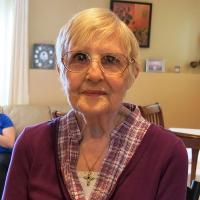 June Barbara Robinson, age 80, went to be with the Lord on Thursday, June 7, 2018 surrounded by her family. She was born in Chicago on June 26, 1937 to Leon and Ruth (Grigsby) Banks. She married William Ridge in Cook County, Ill. on April 10, 1957.
In 1967 the family moved to Three Rivers, where she was a long-time resident. In March of 1969 she received Christ as her personal Savior. June was a dedicated mother and long-time member of Temple Baptist Church in Three Rivers. Mr. Ridge preceded her in death Dec. 16, 1984. June moved to Mustang, Okla. in 2017. She attended the Victory Baptist Church of Yukon, Okla. She is survived by her four children, Michael (Delia) Ridge of Mustang, Virginia (Tom) Slentz of Constantine, Kenneth Ridge of Mustang, and Larry (Sonhui) Ridge of Whitehall, Mich; six grandchildren, Michael, Rebecca, Stephen, Justin, Logan and Grant; two great-grandchildren, Ethan and Scarlet, and one brother, Donald (Carol) Banks. She was preceded in death by her parents; husbands Oscar Young and Harry Robinson; three brothers Leon (Rosemary) Banks, Wayne (Mary) Banks, and Raymond (Betty) Banks.
Services are scheduled for 10 a.m. on Monday, June 11, 2018 in the Chapel of The Good Shepherd at McNeil’s Funeral Service, Mustang, Okla. Online condolences may be made at www.mcneilsfuneral.com