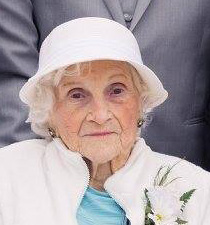 Mrs. Zelma Mae Castle, age 94, of Three Rivers, passed away early in the morning on Friday, June 15, 2018 at Three Rivers Health. She was born December 12, 1923 in Goshen, Indiana the daughter of the late Henry W. and Iva E. (Albin) Davidhizar.

She graduated from Marcellus high school in 1941. In 1942 she married the love of her life Vernon L. Castle, Sr. Throughout her life she was employed at a number of places including: Continental Can, The Three Rivers Press, Century 21, and Remax as a realtor. She was an avid card player, participating in many euchre and poker tournaments in the area.

Funeral Services will be held at Hohner Funeral Home. Visitation will be held on Thursday, June 21, 2018 from 4:00 p.m. until 7:00 p.m. A funeral service will be held on Friday, June 22, 2018 at 12:00 noon with an hour of visitation prior. Pastor Bob Anderson will be officiating and interment will take place at Marcellus Cemetery following the service. A luncheon will follow at Eagles Lodge #2303 of Three Rivers at 2:00 p.m.

Memorials in memory of Zelma can be directed to the American Heart Association. Envelopes are available at the funeral home.