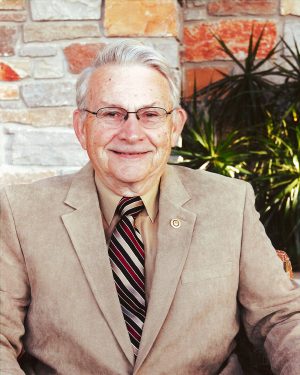 On January 11, 1964 Larry was united in marriage to Mrs. Martha G. “Marty” Clark (Marketon) in Waverly, Minnesota.  Together they raised two beautiful children.  Larry and Marty lived at several locations throughout their lives together, and retired in Three Rivers on Fisher Lake.  Larry was a graduate of Bowling Green State University and spent the majority of his professional career with the General Telephone Company, retiring as a regional executive.  After moving to Three Rivers, Larry served as the Chairman of Three Rivers Health, Board of Directors Three Rivers Health Foundation, Vice President of St. Joseph County Health Network, and was the Vice President of the Carnegie Center for the Arts.  He belonged to Immaculate Conception Catholic Church where he served as the Chairperson of the Finance Committee.

Larry loved his family, including his wife, children, two grandsons, and sister.  Larry enjoyed tennis, golf, and watching his children and grandchildren participate in various athletic and academic pursuits.  Larry’s true passion was baseball and was a life-long New York Yankees fan.

Larry was preceded in death by his parents and beloved wife of fifty-one years, Marty.  He leaves his cherished family; daughter Dr. Melissa (Dr. Laura Ofstead) Clark, son Mark Clark and his wife, Kyria, and their sons, Christian and Gabe, and sister Judi (Tom) Reinhart.  He also leaves many nieces, nephews, close friends and professional relationships.

In lieu of flowers, memorials may be donated to the University of Michigan-Rogel Cancer Center Clark Family Fellowship.

Online donations may be directed to https://leadersandbest.umich.edu/find/#!/give/basket/fund/700497.

Donations may also be directed to the Carnegie Center for the Arts, 107 N. Main St, Three Rivers, MI 49093.  Envelopes will be available and donations may also be sent to Hohner Funeral Home in care of arrangements.  Online condolences may be shared at www.hohnerfh.com.