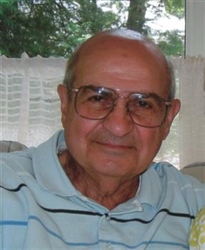 Lawrence Sarhatt, age 86, of Three Rivers (Corey Lake), passed away peacefully surrounded by his loving family on Tuesday, July 31, 2018 in Kalamazoo.  Larry was born on May 10, 1932 in Flint, the son of Mr. Ewas and Elishya Sarhatt.  Larry graduated from St. Michael’s Catholic High School in 1950.  Larry served his country in the U.S. Army from 1953 until his honorable discharge in 1961.   In 1957 he received his bachelor degree from W.M.U.  In 1960 Larry received his Jurist Doctorate from Wayne State University and then graduated from the F.B.I. Academy in 1961.

From 1961 until 1982 Larry served as a Special Agent and Special Agent in Charge for the F.B.I. until his retirement.  In 1982 Larry worked as a self-employed private investigator and also was a Deputy Sheriff for St. Joseph County until 2002.

Larry was preceded in death by his parents, one sister, two brothers, son-in-law, Todd Hansen; three sisters-in-law, and one brother-in-law.

Mass of Christian Burial will be held at 10:00 a.m. on Saturday, Aug. 4th, 2018 at Immaculate Conception Catholic Church with Fr. Antony Rajesh as celebrant.

Memorial donations may be directed to the Knights of Columbus or the Immaculate Conception Church.  Envelopes available at the funeral home.