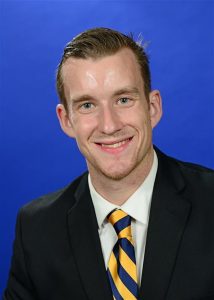 The Kalamazoo Wings have named Isaac Berky as their new Broadcaster and Director of Public Relations.

Berky, 27, replaces Joe Roberts, who was named as the Broadcaster for the AHL Utica Comets earlier this summer.

Before coming to Kalamazoo, Berky was the Director of Communications and Media and Broadcaster for the ECHL Norfolk Admirals last season. Berky was also the Broadcaster and Director of Media Relations for the USHL Omaha Lancers prior to the Admirals. Berky also spent two years as a sports anchor and reporter for a television station in Bismarck, ND.

The Nashville, TN native became hooked on hockey when the NHL Nashville Predators came to town.  The sport exploded in the area, according to Berky, as did his interest in the game.

Berky started playing ice hockey at the age of seven, and continued played through high school and at Adrian College, where he played four years of club hockey.

As for becoming a broadcaster, Berky says that the fact his family didn’t have cable television played a big role in his career.

“As a kid, I never had cable growing up and was always listening to sports on the radio,”  Berky said, “and that really peaked my interest into the broadcasting side. The ability of those broadcasters to paint the picture of the game and make it come to life for me while I was listening helped create my passion for sports, and it’s something that I hope I can pass on.”

Berky grew up listening to Pete Weber call games for the Predators.   “(Weber) has and will always be my favorite voice to listen to and I think I’ve taken a lot of similarities from years of listening to him and his style,”  Berky added.

He also points to current Vegas Golden Knights broadcaster Dan D’Uva as a favorite.   “I was fortunate enough to work with him (in Syracuse) for a season and be able to call him a mentor and friend. He’s definitely someone who has taught me a lot,” Berky said.

“Any hockey broadcaster that tells you they don’t look up to Mike “Doc” Emrick is most likely lying to you,” Berky said.  “Doc is certainly the gold standard for hockey broadcasters and we all try to be more like Doc with every call.”

Berky said he feels fortunate that there are so many great broadcasters across the leagues that are always willing to help each other out.  “ I’m constantly learning and evolving as I work with other guys in the league and around sports in general,” he added.

One thing you most likely will not hear during a Berky broadcast is a signature catchphrase.   “I’ve never been a fan of catchphrases personally because they seem too canned and not genuine to me”, he said, “just a personal opinion, though.”

As the K-Wings celebrate their 45th season of professional hockey, Berky has already started immersing himself in the storied history.

“The 45th anniversary season is going to be awesome! I’m still diving into the history myself but with all of the alumni around the area, including two behind the bench (Nick Bootland and Joel Martin),  I think there are going to be a lot of really cool things going on this season that are only going to set the stage for 45 more great years of K-Wings Hockey in Kalamazoo,” he said.

Berky has only been on the job for a few weeks, but one thing is for sure; Kalamazoo loves hockey.

“The opportunity to come to an area rich with hockey tradition, that loves the game like Southwest Michigan does, is something I couldn’t pass up,” he said. “The K-Wings are a premier organization in the ECHL and the chance to join an organization as respected as this was a great opportunity.”

Berky is ready for the season to start.

“I’m definitely grateful to be able to be apart of something like this,” he added.  “It’s evident that everyone cares immensely about the K-Wings and puts the organization first.”