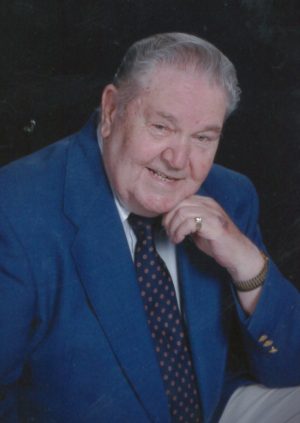 Norman Harold Brunner, age 83, of Three Rivers passed away at home surrounded by his family on Sunday, September 16, 2018. He was born on October 25, 1934 the son of Sherman and Thelma (Gillett) Brunner in Newberg Twp, MI.

Norm attended schools in Three Rivers graduating from Three Rivers High School in 1952. He went onto to attend Western Michigan University where he was a member of Sigma Phi Epsilon.

He spent his working years in sales most recently at Curtis Trailer in Schoolcraft. Norm was in the 172nd airborne fighter bomber squadron in Battle Creek. On August 2, 1958 Norm was united in marriage to Carlene Marrietti at Immaculate Conception Catholic Church of Three Rivers with Fr. John Fackler officiating.

Norm was a founding member of Three Rivers Community Players where he was a board member for many years and will be remembered for the many plays he acted in. He was also a member of the Kiwannis Club and Past Exalted Ruler of B.P.O.E. #1248 where he was a lifetime member.

He had a love for antique cars, especially his 1961 Chevy Impala Convertible. He had an extraordinary memory and was well known for his joke-telling.

He is survived by his wife of sixty years, Carlene; children, Michele (Michael) Brewer; John Brunner, and Allison (Joseph) Giles; seven wonderful grandchildren as well as many nieces and nephews.

Mass of Christian Burial will be held at 11:00 a.m. on Friday, September 21, 2018 at Immaculate Conception Catholic Church of Three Rivers with Fr. Antony Rajesh as celebrant.

Memorials in Norm’s name may be directed to West Michigan Cancer Center where he received kind and compassionate care for the past two and a half years. Envelopes available at the funeral home. Online condolences may be shared at www.hohnerfh.com.