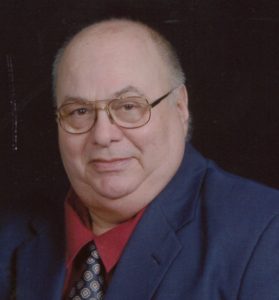 Charlie graduated from Three Rivers High School in 1962. He served his country honorably in the U.S. Marine Corps., during the Vietnam War. On February 21, 1970 he married the love of his life Marcia Ann Dyer.

Charlie and Marcia made their home in Three Rivers where Charlie was employed at Armstrong Machine Works for over thirty-three years before retiring in 2006, where he made many lasting friendships. Charlie was a cub and boy scout leader for many years. He was an active and faithful member of the First Presbyterian Church where he served as a Deacon and Choir member. Charlie was very active with the Three Rivers Community Players as a set director, actor, and all around fix-it guy.

Mr. Kauffman was preceded in death by his parents and six siblings.

He leaves to cherish his loving memory, his beloved wife, Marcia Kauffman; one son and daughter in law, Jeffery (Desiree) Kauffman, and their children, Tabatha, Ethen Kauffman, and John Miller; one brother, Richard (Lydia) Kauffman, and one sister, Diane Kauffman, as well as a host of nieces, nephews, and cousins.

Funeral Services will be held at 11:00 a.m. on Wednesday, Oct. 10th, 2018 at the First Presbyterian Church, Three Rivers with Rev. Brenda Deily officiating.

Interment will be held at 10:00 a.m. on Wednesday, Oct. 10th, 2018 at Poe Cemetery with Military Honors under the auspices of the American Legion Hice-Shutes Post #170.

Memorials may be donated the First Presbyterian Church (General Fund) or the American Cancer Society. Envelopes will be available at the funeral home or church. Online condolences may be shared at www.hohnerfh.com.