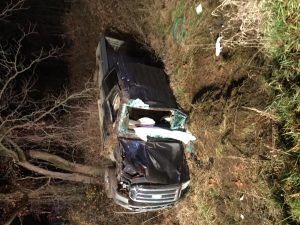 Two people were injured in a single-vehicle crash over the weekend in Cass County’s Wayne Township.

A pickup driven by Adam Molter, 38, of Dowagic, was heading west on Dutch Settlement Road when it left the roadway and rolled down an embankment. It came to rest on its driver’s side.

Molter was transported by helicopter to Borgess Lee Memorial Hospital.

Neither Molter nor Hemenway were wearing their seatbelt, authorities said.

Highs today near 80. Mild tonight with lows near 65. Very warm Friday with highs …