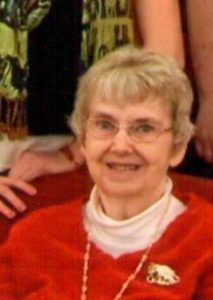 Julia A. Mallo, age 77, of Constantine, passed away on Monday, December 3, 2018 at Borgess Medical Center.  She was born on May 17, 1941 in Three Rivers, a daughter of Carl and Donna (Warner) Butler.  Julia graduated from Three Rivers High School in 1959.  On October 10, 1959, she married Robert Mallo at the Porter Baptist Church in Constantine.  She worked as a machine operator for Riblet Production in Middlebury from 1988-2000 and at Sigma Wire in Elkhart from 2000-2008.  Julia loved to sew, and even made many of the clothes she wore.  She loved camping and spending time with her family and grandchildren.

She was preceded in death by her parents, husband, and brother Harold Butler.

Relatives and friends will be received on Wednesday from 4 to 8PM at Eley Funeral Home, Constantine.  Religious services will be on Thursday at Porter Baptist Church at 11AM with Pastor Randy Peterson officiating.  Interment will follow at Shavehead Cemetery.  Memorial contributions can be directed to Gideon’s International.  Online condolences may be left for the family at www.eleyfuneralhomes.com.