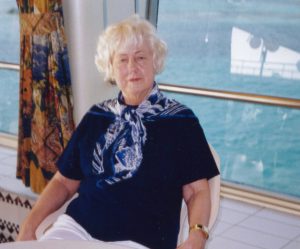 Lola Pauline (Delong) Gross, PhD, age 84, of Three Rivers, died at Bronson Methodist Hospital on Monday, December 3, 2018, surrounded by family, She was born, the 7th of eight children, on January 15, 1934 to Robert Arthur and Mary Brown Delong of Three Rivers. She was married to Douglas Gross on August 8th, 1959. Throughout their marriage they resided in Battle Creek, Kalamazoo, Madison, Wisconsin, Tempe, Arizona and for the past 21 years in Three Rivers.

Lola received her Bachelors and Masters Degrees in English from Western Michigan University and her PhD at Arizona State University. She taught school at the Harper Creek Community schools, Battle Creek, and at the former University High School in Kalamazoo. She also taught at Ball State University in Muncie, Indiana, served as Federal Program Director for the Hopi Indian Reservation at Keams Canyon, Arizona and ended her professional career with the Arizona State Department of Education working with schools administrators and gifted education.

During her retirement, Lola found time for not only reading, bridge playing, estate sales, refurbishing her various collections, crossword puzzles, and entertaining family and friends but also volunteer work i.e. Three Rivers Hospital Board, Carnegie Center and the St. Joseph County Board of Public Works.

A celebration of her life will be held at a later date.