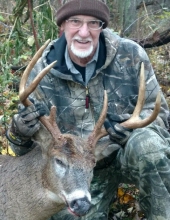 William L. Petty, age 76, of Orland, Indiana passed away unexpectedly Monday, January 28, 2019 at his home.
He was born October 24, 1942 in Valley City, Illinois son of the late William A. and Ruby (Couse) Petty.
Bill resided at Wall Lake in Orland for the past 28 years coming from Cassopolis.
On July 6, 1960 he married Donna Day in Elkhart. She died February 15, 2013.
Bill retired from the Crosbie Foundry in Elkhart following 36 years of dedicated employment.
He was a member of the Helmer United Methodist Church, Elkhart Bass Masters and the Moose Lodge of Goshen. Bill had a true appreciation for the outdoors and was happiest when he was on the water fishing or in the woods hunting.
He is survived by his fiancée: Christal Buse of Orland; two sons: Cliff (Wendy) Petty of LaGrange and Bill (Brittany) Petty of Gaffney, South Carolina; two daughters: April (Mike) Bruce of Colon and Trina Maxwell of Angola; 12 grandchildren; 2 great granddaughters; two sisters: Aleta Illescas and Carol Neice both of Elkhart and several nieces and nephews.
He was preceded in death by his parents, wife and granddaughter: Laylah Underwood.
The family will receive friends from 10:00 AM to 12:00 PM Thursday at the Helmer United Methodist Church, 7530 S State Road 327, Helmer, IN 46747. Funeral services celebrating the life of William L. Petty will be held at 12:00 P.M. Thursday at the church. The Rev. Donna Holcomb will officiate. A continued time of fellowship and the sharing of a meal will immediately follow the service. A graveside service and burial will take place at 2:00 P.M. Friday at Greenlawn Cemetery in Orland.
The Hackman Chapel of Hackman Family Funeral Homes, 114 S. Nottawa St., Sturgis, MI 49091, 269-651-2331 is entrusted with the arrangements.
The family suggests those wishing to make a memorial donation in Bill’s memory consider the Helmer United Methodist Church.
The obituary is also at www.hackmanfamilyfuneralhomes.com where personal messages of support may be left for the family.