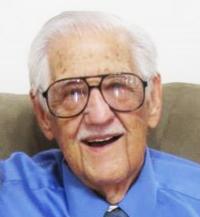 On Dec. 31, 1929, the last day of the Roaring Twenties, William LeClair Abshire, Jr. was born in Three Rivers to William L. and Pauline Ellet Abshire.  He passed away on Thursday, March 21, 2019.
Bill spent his early years in Three Rivers while enjoying summers at his beloved Corey Lake with his parents, brother Jim, sister Alice, and numerous cousins.
He attended schools in Three Rivers, graduating from Three Rivers High School in 1948. Bill played football all four years of high school, being named All Conference end in his junior year and earning a scholarship to Western Illinois University.
In December of 1948, Bill enlisted in the Marine Corps for six years, including one year of active duty and five years in the inactive reserve. Two weeks after his discharge from active duty he asked Marilyn Bullard for a date to see the movie Hamlet. She said yes, and that was the beginning of their 69 years together. They were married in August of 1950. Shortly after their wedding Bill was called back to active duty, serving 14 more months.
In 1954 Bill enrolled at Western Michigan University, graduating in 1957 with a degree in social work and business. Upon graduation, he took a position as a counselor at the reception and diagnostic center at the State Prison of Southern Michigan at Jackson. During this time, he became the state president of the American Federation of State, County, and Municipal Employees Union. While working as the administrative assistant to the warden at Jackson, Bill was offered the position of deputy warden at the Michigan Training Unit in Ionia. The family then moved to Saranac. Bill later worked at the central office in Lansing where he was the Assistant Deputy Director in charge of prisons. When he moved to the position of warden of Riverside Correctional Facility, he became one of eight wardens in the state of Michigan. He retired in 1985. While working for the prison system, Bill’s philosophy always was to never contribute to man’s inhumanity toward man. In life, he always tried to see the best in everyone.
Bill enjoyed painting (all surfaces), playing cards, fishing, parades, picnics, roasting marshmallows, aliens, cats, reading (four newspapers a day), and watching football games. But most of all, Bill loved children. He and Marilyn both wanted and were blessed with a large family. His children, grandchildren, and great grandchildren will always remember the stories he made up just for them – Once upon a time, a long time ago….
Bill was always active and loved an adventure. He and Marilyn enjoyed taking their eight children tent camping, driving throughout the United States in their VW bus. They continued to travel and have adventures throughout their marriage.
Although Bill always said he was a lucky man, his family knows that they are the lucky ones for having had him in their lives. He was and will always be dearly loved.
Bill was preceded in death by his parents, his brother Jim, and his daughter Christine, brother-in-law Arthur Jeffers, sisters-in-law June Dechnik Alexander and Shirley Carter. He is survived by his wife Marilyn, son William LeClair III, daughters Nancy (Paul) Doyle, Leslie Bendall, Abbie Abshire, Sally (Don Harnish) Abshire, Robin (Phil) Furman, and Caroline ‘Carrie’ (Marty) Smith. He also is survived by 11 grandchildren James Stewart, Jason Abshire, Jillian Skym, Mark Bendall, Will Bendall, Corinn Wojciechowski, Jean Page, Robert Flanagan, Mary Paiz, Marty Smith, Joshua Smith, 27 great grandchildren, and four great great grandchildren, sister Alice Jeffers and sister-in-law Bonnie Oakes.
At Bill’s request, the family will have a private memorial. In lieu of flowers, friends may contribute toward adoption fees at the Ionia County Animal Shelter. Arrangements in care of Lake Funeral Home of Saranac. Online condolences may be made at www.lakefuneralhomes.com.