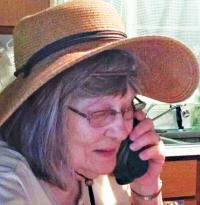 Constance Joan “Connie” Stull, age 81, of Sturgis, passed away early Tuesday morning, March 12, 2019 at home surrounded by her family.
She was born Sept. 25, 1937 in Coldwater, daughter of the late Maynard and Virginia (Steele) Ash.
Connie resided in Sturgis since 1972 coming from Bronson. Her early life was lived in Colon where she was a graduate of Colon High School with the class of 1955.
On Dec. 24, 1956 she married William Robert Stull in Angola. He passed away on Sept. 9, 2007.
She retired in 2000 from Sturgis Molded Products following over 20 years of dedicated employment. Connie was an LPN and had worked at the Coldwater Hospital and Thurston Woods Village in Sturgis.
She was a member of the Mintdale Women’s Club. Connie enjoyed working in her yard and gardening and sewing but truly loved time with her family especially her grandchildren and great grandchildren.
She is survived by one daughter: Stacey (Mark) Boals of Three Rivers; one son: Todd (Karrie) Stull of Sturgis; four grandchildren: Elizabeth, Bryce (Devan), Mason and Brandon; five great grandchildren: Cassidy, Natalie, Arianna, Bentley and Remington; one sister: Carolyn Roach of Colon; three brothers: Warren Ash of Colon, Michael (Susan) Ash of California and Ronnie (Carol) Ash of Virginia; special friend: Beth Handshoe of Constantine and several nieces and nephews.
She was preceded in death by her parents; one sister: Barbara Klawinski; nephew: Kevin Davis and niece: Renee Klawinski.
In accordance with her wishes cremation has taken place. The family will receive friends from 2 to 4 and 6 to 8 p.m. Friday at the Hackman Chapel of Hackman Family Funeral Homes, 114 S. Nottawa St., Sturgis, MI 49091, 269-651-2331. Private burial of the ashes will take place at Fort Custer National Cemetery in Augusta, Mich.
The family suggests those wishing to make a memorial donation in Mrs. Stull’s memory consider the American Cancer Society, P.O. Box 22718, Oklahoma City, OK 73123.
The obituary is also at www.hackmanfamilyfuneralhomes.com where personal messages of support may be left for the family.