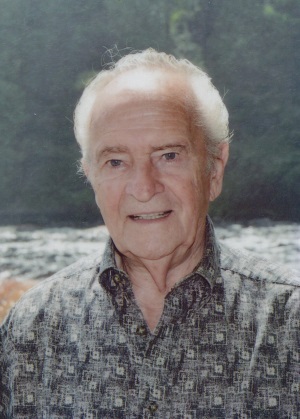 Rudolfs (Rudy) Kalnmals, age 89, of Three Rivers, passed away early Sunday morning, March 24, 2019 at his home under hospice care after a short illness surrounded by his family.  He was born in Kuldiga, Latvia on June 23, 1929 to Hermans and Anna (Murnieks) Kalnmals.

He was preceded in death by his parents and his wife of 55 years, Ruta (Eglitis).

He emigrated to Chicago from Esslingen, Germany in 1949 and served in the United States Army in the Korean War from 1951-1952.  He met his wife Ruta and married on January 15, 1955.  He was employed by Ampex and left there to start his own electronics business.  He was a member of the Latvian Baptist Church of Chicago where he served on the board and led the choir.  He also led the Zion Evangelical Lutheran Choir in Chicago for 30 years. In 1999 he and Ruta retired to their summer home that he built with his father in Three Rivers and joined the Latvian Lutheran Church in Kalamazoo and served on the board and directed the choir.  He loved music his whole life, loved helping people, and could often be found in the woods chopping down trees and splitting wood to heat his home that he shared with his granddaughter, Liena.  He had a ready smile for anyone he met and loved his children and grandchildren immensely.  His desire was that his life always reflect Jesus’ love and bring glory to His Lord and Savior.

Funeral services will be held on Wednesday, March 27, 2019 at the Latvian Evangelical Lutheran Church of Kalamazoo, with Rev. Aija Graham officiating, 100 Cherry Hill Street, Kalamazoo, Michigan at 10:00 a.m. with visitation beginning at 9:00 am. Interment will be held in Riverside Cemetery, Three Rivers at 3:00 p.m.

Memorials may be made to the Latvian Evangelical Lutheran Church of Kalamazoo. Envelopes will be available at the church and Hohner Funeral Home.