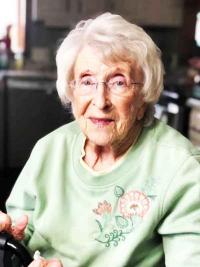 Eleanor (Ellie) Virginia Grunert, age 94, of Three Rivers, went to be with the Lord early Monday, April 22, 2019, at her home surrounded by her loving family. She was born May 17, 1924, in Akron, Ohio, the daughter of Wint and Lottie (Kapp) Hughes.
Ellie grew up in Detroit where she met her beloved husband Fred. After Fred came home from World War II, they were married in Three Rivers, where they spent most of their lives. Ellie proudly earned her high school diploma from Three Rivers Adult Ed where she was thrilled to have her son as her teacher.
Ellie and Fred were the original “Fixer Uppers,” living in over 40 different residences in their lifetime –from Three Rivers to California to Florida – and back. She had many different occupations, working at Continental Can, Michigan Power and most importantly as a very successful Avon Lady for 40 years. Her number one hobby was garage sales, but she thoroughly enjoyed belonging to Circle 4 Extension Club, Red Hats, Ladies Craft and Devotions at TR Nazarene, and attending any gathering of friends. She was always the first one to help somebody, whether they needed food, clothes, or a listening ear. She was the epitome of what it means to be a Christian – nothing mattered to her more than her relationship with Jesus Christ and she did her best to live every day for Him.
She was preceded in death by her parents; her husband Fred; one grandson, Kenneth Albright; son-in-law Henry Niewenhuis; and one brother Lester Hughes.
She leaves to cherish her memory two sons, Carl (Barbara) Grunert of Midlothian, VA, and Fred (Mary) Grunert of Three Rivers; one daughter, Sharon (Grunert) Albright of Three Rivers; one “adopted”daughter, Carol McCally, of Three Rivers; grandchildren Patricia (Mark) Holmes, Dana (Ryan) Nichols, Jason Grunert, Fred (Marie) Grunert, and Jessica Grunert; great-grandchildren Calvin (Cailyn) Holmes; Justin, Nathan and Ellise Holmes; Kiah, Ashton and Brooklyn Nichols; Allison, Lydia, Freddie, and Matthew Grunert; two sisters-in-law Betty Grunert and Irene Imel, as well as a host of nieces and nephews.

Memorials may be donated to Ellie’s Closet, c/o Fred Grunert to help cloth young children and others in the community. Envelopes available at the funeral home.