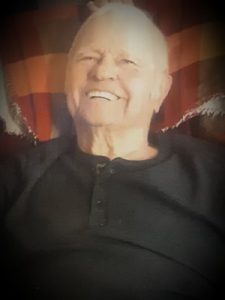 “Drake” Frank Edward Ward, age 87, of Three Rivers, passed away on Wednesday, July 17, 2019 surrounded by his devoted and loving family. He was born April 20, 1932 in Lancaster Wisconsin, the son of Lyle Ward and Eva (Tindell) Ward.

He was a Staff Sargent in the US Air Force, from April 1951 until April 1955, serving in England. After his service in the Air Force, he was employed at Continental Can and then was employed by the United States Post Office for 25 years. He then retired from the Post Office and became the Club Manager of the Elks Clubs #1248 for 17 years.

Drake was a lifetime resident of Three Rivers where he and Jeannie raised their 4 children. In Drake’s younger years he enjoyed golf, cards, and the company of his family and friends.  He also enjoyed traveling to Arizona. Drake’s life was filled with love, laughter, friends, and family.

Drake’s greatest success was his family, and with them he found his greatest achievement and intense pride.

Drake is preceded in death by his parents, his loving wife Jeannie, one brother Richard Ward, two nephews, and one niece.

Cremation has already taken place per his request. A Service of his life with Military Honors, will be held at 1pm on Saturday July 27, 2019 at the Elks Lodge #1248, 603 W Michigan Ave., Three Rivers MI 49093 with lunch following.

Donations may be directed to Southern Care Hospice Services, or Michigan Elk Major Project Cripple Children Fund Lodge #1248. Envelopes will be available at the Elks Lodge or Hohner Funeral Home in care of Drakes’ arrangements.