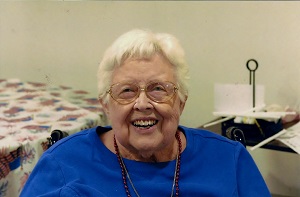 Leatrice went by June. She was born June 20, 1924, in Schoolcraft, the daughter of Carl V. and Helen M. (Manning) Adams.

On June 1, 1964, she married Phillip J. Powell, in Kalamazoo. Together they had four children; three daughters: Sandra, Kyle, & Dale, and one son: Gregory Powell. They were married for 67 years before he passed away April 11, 2014.

June graduated from Marcellus High School in 1942 and soon became a long term resident of Kalamazoo. She was a stay at home mother to her four children. She enjoyed creating ceramics, playing on the Lady’s Wednesday night Bowling League at Airway Bowling, loved to golf, and took great pleasure being around her family and friends, especially her grandchildren and great grandchildren.

June is preceded in death by her parents: Carl & Helen Adams, and her brother: Gerald Adams.

The family would like to welcome friends for visitation on Wednesday, July 17, 2019 from 10 AM, at Mater-Ralston Funeral Home, with the funeral service to be held the same day at 11 AM, and burial to follow at Marcellus Cemetery. Memorial donations may be directed to the Wounded Warrior Project, P.O. Box 758516, Topeka, Kansas 66675-8516. Online condolences may be left at www.materralstonfuneralhome.com.