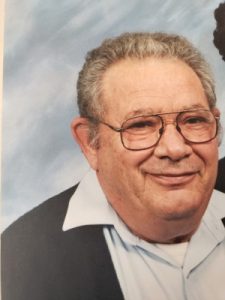 Max Ray Spealman, age 82, of Scotts, died Sunday, July 21, 2019 at Kairo’s Dwelling Hospice Home in Kalamazoo. He was born in Fulton, MI on May 9, 1937 the son of Gerald J. and Fay (Waits) Spealman, and has been a lifetime resident of the area. He graduated from Vicksburg High School and served in the Army National Guard. Max was married to Sheila A. Moored on Feb. 19, 1956 in Vicksburg. Max worked as the Head of Maintenance for Kalamazoo Valley Community College and later for the Hinman Company of Kalamazoo, and was known to be able to fix almost anything. He enjoyed travelling, camping, bowling, and golf in his spare time.

The family will receive friends on Sunday, July 28th from 2 to 5 pm at the Eickhoff Funeral Home in Mendon. Funeral services will be 11 am Monday, July 29, 2019 at the Crossroads Missionary Church with Pastor Bryan Balasa officiating. Following a luncheon, burial will be in Leonidas Cemetery. It is suggested that memorial donations be directed to either the Crossroads Missionary Church, 22605 M-60, Mendon, MI 49072, or to Kairo’s Dwelling, 2945 Gull Road, Kalamazoo, MI 49048. Condolence may be expressed to the family online at www.eickhofffuneralhome.com