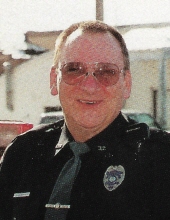 John Bert Winkens age 75 of Sturgis, retired police officer, passed away early Sunday morning, September 1, 2019 at the Glen Arbor Hospice Residence in Battle Creek.
He was born March 12, 1944 in Melrose Park, Chicago, Illinois son of the late Frank and Agnes (Pawlowski) Winkens, Sr.
John resided in Sturgis since 1968 coming from Chicago where his early life was lived.
On December 19, 1970 he married Linda Bender at the First United Methodist Church, Kimball Chapel in Sturgis.
John retired in 1997 from the Sturgis Police Department following nearly 25 years of dedicated service to the community. Following his retirement he worked at Dave Smith Pontiac, a job he truly loved, and for eight years he was employed at Geno’s Pizza both in Sturgis.
John was proud to have served his country in the U.S. Army as a mechanic earning the rank of E-4. He was a member of the St. Joseph County Conservation and Sportsman Club. He enjoyed shooting especially with his son Ian, tinkering and his music. John had interests and hobbies but what he truly loved was being a dedicated husband and father and spending time with his family.
He is survived by his loving and dedicated wife of 48 years: Linda and one son: Ian (Amy York) Winkens of Sturgis.
He was preceded in death by his parents; one brother: Frank Winkens, Jr. and three sisters: Gloria Winkens, Marion Agnes Vreeland and Joan Vanderkolk.
In accordance with his wishes cremation has taken place. The family will receive friends from 12:00 to 2:00 P.M. Saturday at the Hackman Chapel of Hackman Family Funeral Homes, 114 S. Nottawa St., Sturgis, MI 49091, 269-651-2331 where a memorial service celebrating the life of John B. Winkens will begin at 2:00 Saturday. A graveside committal of the ashes will follow the service at Oak Lawn Cemetery in Sturgis where full military honors will be conferred by Captain John J. Kelley Post #1355 VFW and the U.S. Army Honor Guard.
The Hackman Chapel of Hackman Family Funeral Homes, 114 S. Nottawa St., Sturgis, MI 49091, 269-651-2331 is entrusted with the arrangements.
In lieu of flowers the family would appreciate memorial donations be directed to the Hackman Family Funeral Homes, P.O. Box 9, Sturgis, MI 49091 to help with expenses.
The obituary is also at www.hackmanfamilyfuneralhomes.com where personal messages of support may be left for the family.