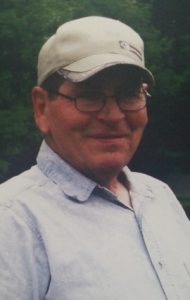 Larry Wilkins, age 78, of Three Rivers, passed into the arms of angels in the early hours of Tuesday, September 24, 2019 surrounded by his loving family. He was born July 2, 1941 in Detroit, the son of Harry and Edna (Hackenberg) Wilkins. He graduated Three Rivers High School in 1960. On June 29, 1963 he married Terry Lusson in Three Rivers, and from this union they have seven children.

He was a business owner and successful entrepreneur for 45 years, owning a painting business, rentals, motels, and a lawn care service. He was faithful, dependable, loyal, trustworthy, helpful, prompt, selfless, had a great sense of humor, and always gave a hug.

In 1993 Larry gave his life to the Lord. There was evidence of his walk with Him in the way Larry showed his love to others. God, family, country were his cornerstones. For almost thirty years Pastor Leon Troyer’s friendship, and more recently Pastor Jerry Solis, were influential in Larry’s walk with Christ.

He was an excellent provider and worked tirelessly to meet the needs of those he loved. Family and friends were important to Larry. He had the gift of being able to see the needs of others, and was generous in meeting those needs. He was the first one to lend a hand with any project. With 7 children there was the project he had just completed, the one he was working on, and the next one waiting. Larry did everything with excellence. He did his best every day; he was not a quitter; he never gave up on anything. The words “I can’t” were not part of his vocabulary.

Larry enjoyed hunting with his sons, and spending time at Fisher Lake and traveling with his daughter and favorite son-in-law Tom. He was honored to have Al Barnhart as a friend. Al was the “best” in best friends; for thirty years they met every Saturday morning for breakfast and fishing.

Larry was preceded in his passing by his parents Harry and Edna Wilkins, brother Jerome Wilkins, and grandson Lance Castle.

Larry was a man of integrity and expected no less from his family and friends. His legacy will be felt for generations.

Memorial services will be held at Hohner Funeral Home of Three Rivers on Thursday, October 3, 2019 with visitation at 11:00 a.m. until time of service at 1:00 p.m. with Pastor Jerry Solis and Pastor Larry Wilkins II officiating.

Memorials made in Larry’s memory may be directed to the family c/o Terry Wilkins. Envelopes are available at the funeral home. Online condolences may be left at www.hohnerfh.com