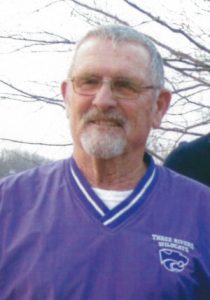 Jon Michael “Mike” Bosma, age 80, passed away peacefully Friday morning, Sept 27, 2019 at his home on Fisher Lake. Mike was born in Kalamazoo, the son of Jon and Virginia (Jakeway) Bosma. He graduated from Portage Central High School and went on to attend Western Michigan University where he earned his degree in Education. He began his teaching career in Comstock Public Schools and then moved to Three Rivers Community Schools where he was a principal at Huss, Barrows, and Park Elementary Schools.

Mike married Pamela Shoemaker in 1985 and their family began soon after with son Drew in 1990, Isaiah in 1991, and daughter Mariah in 1996. The Bosma’s took their children on trips every Spring break and Summer vacation, traveling everywhere from the Eastern Seaboard to the Western National Parks. These joyful cultural learning experiences took them to the Bahamas, St. Maartens, the Mayan Ruins, and many, many places in Mexico. They had so much fun sometimes it was hard to come back, but they usually came home with the same number of kids they left with.

Mike was elected to the School Board in 1980 where he helped oversee policy and procedure to provide the best possible learning environment for kids in the district he loved. When he retired, he needed to stay involved and connected to the community, so he continued on the School Board, as well as the board of the I.S.D. and T.R.A.M. (Three Rivers Area Mentoring).

Mike was a fanatical member of the TR Sports Boosters where he bought, delivered, cooked, and served at the concession stand, always giving 110% to local teams. He loved to make sub sandwiches and cookies for the Frosh & JV basketball players who always had to stay late to watch Varsity. Over the years, Mike helped coach kid’s basketball, Rocket Football, and Little League. He was an outstanding principal and many people said that when he retired, things would never be the same because he understood and looked out for his staff and students alike. He was passionate about education. He instinctively watched out for the underdog, the meek & mild among us who needed a smile and a good word. He was friends with folks of every stripe. He remembered kids from decades past and could pick them out of a crowd all grown up….and they remembered him: “Hey, Mr B!!”

Mike is preceded in death by his parents, Jon and Virginia, his brother Curt, and his father-in-law Earl Shoemaker.

He will be genuinely missed.

Memorial services will be held at Riverside Church in Three Rivers on Saturday, Oct 5th, with visitation from 9:00 to 11:00 a.m. and memorial service beginning at 11:00 a.m. with fellowship afterward.