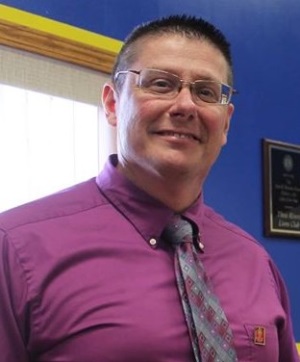 Michael Ray Zolen passed away on Friday, November 22, 2019 with loved ones close by his side.  He was born on September 15, 1964 in South Haven to Steven Zolen and Renita (Norman) Larkin.

Mike’s work career began in Three Rivers at Wellington’s Paint Store, then moved to Kauszler’s  Hardware, and from there to Wolohan Lumber.  Mike then connected with Tom Meyer and worked at Fitness First before he became the Client Sales Director with I-Med where he has been for the past 20 years.

Mike was involved with several organizations in Three Rivers over the years. Mike was very active with the Three Rivers Rotary Club where he served as Club President and traveled to Belize on two occasions to help build a school for the children there. Mike was presented the Paul Harris Award for his charitable work with Rotary. Mike was also active with Rotary International.

Mike was also on the planning committee for St. Joseph County Relay for Life for several years. He was an ambassador with the Chamber of Commerce.  Mike enjoyed many hobbies over the years including obtaining a 2nd Degree Black belt in Karate, body building, hiking the Lakeshore of Lake Michigan and spending time with many close friends. Mike was also a member of the United Methodist Church in Three Rivers. Mike made many friends wherever he went.

In 1986 Mike married Karen (Bonebright) Soule and together they had one daughter, Kristen Zolen who survives. Mike and Karen later divorced but remained friends as they parented their daughter.

Also surviving is his mother; Renita Larkin of South Haven and father; Steven Zolen of Tennessee; three brothers; Rich Zolen of Kalkaska MI, Steven (Connie) Zolen of Jonesboro, AR, and Terry (Beth) Zolen of Lebanon, TN; two aunts; Marjorie Norman and Marian Norman, many cousins, nieces and nephews, and his girlfriend Heather Karmon of Nashville TN. Mike also cherished his friendships with Rick Daniels and Chad Corte along with many others.

In accordance with Mike’s wishes cremation has taken place and a celebration of his life will be held at Hohner Funeral Home on Saturday, November 30, 2019 with visitation beginning at 10:00 a.m. until time of service at 11:00 a.m. with Pastor Derl Keefer officiating.

Memorials can be given Mike’s name to the Three Rivers Foundation towards the Rotary Belize Project or the Three Rivers United Methodist Church. Envelopes are available at the funeral home or church.