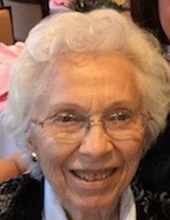 Shirley Ruth Harker, age 88, of Sturgis, passed away early Tuesday morning November 19, 2019 at her home.
She was born February 12, 1931 in Detroit, daughter of the late Osborn and Ruby (Enders) Gauss.
Shirley resided in Sturgis and was a graduate of Sturgis High School with the class of 1949.
On June 4, 1949 she married Jack E. Harker in Sturgis. He preceded her January 28, 2004.
For many years she owned and operated with her husband and son Harker Electric in Sturgis.
Shirley was a member of the St. Joseph Historical Society. She enjoyed attending the monthly luncheons with Jack’s Sturgis High School class of 1947 and spending time with her friends and family especially while sharing a meal together. Shirley had interests and hobbies but what she took the most pride in was her family and always cherished time spent with each one of them.
She is survived by two daughters: Peggy (Duane) Graham of Three Rivers and Laurie (David E.) Wallace of Fresno, California; two sons: Ken (Terri Montoya) Harker and Don (Linda Hicks) Harker both of Sturgis; eight grandchildren: Shane (Lena) Graham, Lisa Graham, Rion Graham, Lisa (Rob) Maldonado, Michael Singleton, Erin Singleton, Bethany Singleton and Brandon Singleton; four great grandchildren: Timothy Graham, Jack Graham, Stone Maldonado and Alexis Graham; two sisters: Laura Gang of Sturgis and Ethel Buhl of Klinger Lake and many nieces and nephews.
She was preceded in death by her parents, husband; granddaughter: Myra Graham and two brothers: Paul Gauss and Eddie Gauss.
As Shirley requested, cremation has taken place, and there will be no services held. The family will receive family and friends at the Sturges-Young Center for the Arts, 201 N. Nottawa Street, Sturgis, from 2:00 to 4:00, on Saturday, November 23, 2019.
The Hackman Chapel of Hackman Family Funeral Homes of Sturgis is entrusted with the arrangements.
The family suggests in lieu of flowers memorial donations be directed to the Sturgis Salvation Army, 105 N. Fourth Street, Sturgis, MI 49091.
The obituary is also at www.hackmanfamilyfuneralhomes.com where personal messages of support may be left for the family.