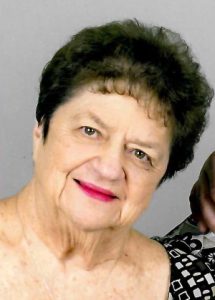 Joan worked in the fiberglass industry for various companies including Acker Plastics and Don Acker. She also worked as an aide in the Hospital operating room. She was a member of the COA, Kitchen Band, Anglemyer’s Tae Kwon Do and enjoyed playing cards with the widows club. Joan was known for her beautiful cake making.

Relatives and friends will be received at the Eley Funeral Home in Constantine on Thursday from 4 to 7 pm. Religious services will be held Friday at 11 am at the funeral home, with Pastor Thomas Short, Elkhart East Christian Church officiating. Burial will be in Plum Grove Cemetery.

Memorial contributions may be directed to Elkhart East Christian Church. Online messages may be left for the family at www.eleyfuneralhomes.com.