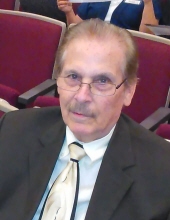 Eugene A. “Pete” Lehman, age 81, of Sturgis, passed away Thursday, June 4, 2020 at his home.
He was born Sept. 4, 1938 in Akron, OH a son to the late Carter and Welcome (Foster) Lehman.
As a young child the family moved from Rogers, OH to White Pigeon, where Eugene attended White Pigeon High School.
On June 15, 1957 in Ft. Wayne, he married Dorothy M. Lowden.
Eugene was an entrepreneur starting several area businesses including, Centurion Vehicles, Continental Accessories, Quadra Mfg, in White Pigeon, and Ace 5th Wheel. He had also been employed by Montgomery Wards in Sturgis for 14 years and many people remember him as the “Shoe Salesman.”
He enjoyed collecting vintage cars and has owned over 37 of them over the years with a 1957 DeSoto as his favorite.
Eugene was one of Jehovah’s Witnesses and a member of the Sturgis Congregation. He was involved in the building of the First Kingdom Hall in Sturgis in the late 1950’s.
Surviving are his wife: Dorothy; 3 sons: John (Abby) Lehman of Goshen, Jeffrey (Nicole) Lehman of Granger, and Jamey (Sarah) Lehman of Sturgis; 10 Grandchildren: Kirsten (Rich) Keller, Clinton (Lisa) Lehman, Corinne (Jeremiah) DeMoss, Nathan (Jackie) Lehman, Brooke (Steve) Haas, Wesley Lehman, Cole (Jackie) Lehman, Kyle (Destiny) Lehman, Slayde Lehman, and Savannah Lehman; Several Great-grandchildren; 2 sisters: Fawn Smith and Annabelle Lehman; and several nieces and nephews.
He was preceded in death by his parents, 6 siblings, and one grandson: Anson Lehman in 2016.
According to his wishes, cremation has taken place. A private family memorial service will be held and an online Zoom memorial service may take place at a later date to be announced.
In lieu of flowers, memorial donations may be directed to the Kingdom Hall of Jehovah Witnesses, 69820 S. Nottawa St., Sturgis, MI 49091.
His obituary is also available at www.hackmanfamilyfuneralhomes.com where personal messages of support may be left for the family.