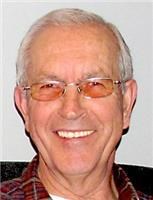 Kenneth Leo Wyant, age 75, of Sherwood, died Monday, June 22, 2020, under the care of his family and with the aid of Hospice Care of Southwest Michigan.
A private family memorial service will be held at 4 p.m. Sunday, July 5, 2020, at Lighthouse Funeral & Cremation in Union City, with Pastor David Farrell officiating. The service will be livestreamed at that time on the Lighthouse Facebook page. A public visitation will be held from 11 a.m. to 3 p.m., also on Sunday, July 5, 2020, at Lighthouse Funeral & Cremation. The number of people inside the funeral home at any one time will be monitored by staff to abide by state restrictions.
Ken was born Feb. 1, 1945, in Portland, Ind., to Chelsea and Margaret (Rudy) Wyant. He attended school in the Columbus, Ind., area until his family relocated to Michigan his senior year. Ken graduated from Colon High School in 1963. He served in the U.S. Army from 1965-67, stationed in Germany, working as a machinery mechanic. On June 15, 1968, he married Judy Albright at Sherwood Free Methodist Church. They have resided in the Sherwood area since then.
Upon returning from the Army, Ken continued his employment at Essex in Three Rivers. He later worked for Chester Cable Company in New York, where he often traveled and was promoted to national sales manager for the electronics division. In 1986, he began his own custom electrical wire and cable sales business. In 1989, Ken graduated summa cum laude from Western Michigan University with a degree in business administration. Additionally, he was a rural mail carrier at the Union City post office for more than 25 years.
Left to cherish their memories of Ken are his loving wife of 52 years, Judy; his children, Scott (Natalie) Wyant of Colon, Brian (Brenda) Wyant of White Pigeon, Kendra (William) O’Donnell of Allendale, Craig (Amy) Wyant of Galesburg and Leanne Wyant of Charlton, Mass.; 11 grandchildren; four great-grandchildren; and his sisters, Anna Carmichael of Elkhart, Ind., and Janice Jalosky of St. Clair.
Ken was preceded in death by his parents; and his brother, Donald Wyant.
In lieu of flowers, memorial donations are suggested to Hospice Care of Southwest Michigan, 222 N Kalamazoo Mall #100, Kalamazoo, MI 49007; or St. Jude Children’s Research Hospital, 501 St. Jude Place, Memphis, TN 38105.
Please visit www.lighthousefuneral.com to share memories, pictures and videos with the family.