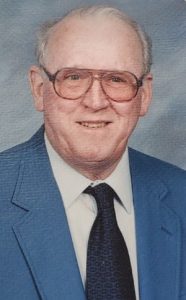 Patrick B. Dailey, age 83, of Three Rivers, passed away peacefully at his home surrounded by his loving family on Wednesday, June 24, 2020.

Patrick was born May 25, 1937 in Three Rivers, the son of John Preston and Anna Mary (Smith) Dailey.

He graduated from Mountain View High School in Arkansas with the Class of 1959. He served in the United States Air Force for four years, and worked as an Inspector at Armstrong International, retiring in 1999 after 33 years of service.

Patrick was a member of Ninth Street United Methodist Church, where he taught Sunday School and served as an usher and trustee.

His many hobbies included working with wood, camping, taking long walks, bluegrass concerts, spending time with family, and square dancing. He collected model trains and was an aircraft enthusiast.  Patrick’s grandchildren and great-grandchildren were the light of his life and he cherished time with them always.

He was preceded in death by his parents and seven siblings.

Graveside interment of cremains will be conducted by Pastor Edward Ross and military honors will be held following the service at Riverside Cemetery.

Memorials made in Patrick’s memory may be directed to the Kalamazoo Air Zoo, Three Rivers Hospice, or Three Rivers Food Site in his name. Envelopes are available and may be sent to Hohner Funeral Home in care of his arrangements.