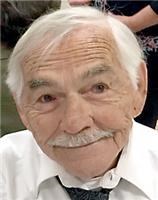 Albert Duane Rowden, age 92 of Sturgis, died peacefully on July 5, 2020, at his granddaughter’s residence in Livonia.
He was born March 7, 1928, in Saginaw, to Walter and Elsie Ann (Rosine) Rowden. He moved as a young child to Lapeer, where he graduated from Lapeer High School in 1946.
In October 1946, he enlisted in the U.S. Army, serving in World War II (Japan), and also The Korean War.
Al managed the McLellan, McCrory and Green Stores for 46 years, coming to Sturgis in 1972, and retiring in 1992.
On Oct. 18, 1949, he married Eleanor Ruth (Brown) Rowden. She preceded him in death July 31, 1995.
Al Rowden had a love for Klinger Lake. You would see him at Klinger Lake Marina, where he docked his boat for the past 40-plus years. Al was known for his kindheartedness, and his Christmas lights were a hit with all the area children and his grandchildren. You would always see him out “bumming around” with one of his grandchildren or great-grandchildren. We all have many happy memories, and we will miss him dearly. He will forever shine his light in his children, grandchildren and great-grandchildren’s lives.
He is survived by his four children, Brent (Dalene) Rowden, Fort Wayne, Ind., Gary (Pam) Rowden of Douglas, Mass., Brenda Rowden Chambers of Sturgis and Dawn Rowden Conner of Sturgis; grandchildren Annemarie (Phil Frutig) Rowden, Joshua (Tonya) Rowden, Shaune (Drew) Rowden-Mark, Kendra (Dan) Saurer, Joel (Erin) Rowden, Kristina (Christopher) Rudgers, Gregory (Stephanie) Rowden, Jonathan (Miranda) Chambers, David (Gretchen) Chambers, Michael Chambers, Nicholas (Mallory) Conner and Chase (Brittany) Conner; 16 great-grandchildren; a brother, Tom Rowden; and many nieces and nephews.
He was preceded in death by his parents; his wife, Eleanor; five brothers; and a sister. Al also was preceded in death by a great-granddaughter, Veda Alane Conner, in 2012; and a son-in-law, Dennis Conner, in 2020.
A military service will be held at 1 p.m. July 28 at Oak Lawn Cemetery in Sturgis.