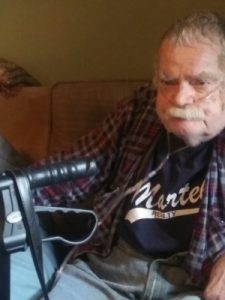 He served in the U.S. Army until his honorable discharge in 1959 and was a member of the American Legion Hice-Shutes Post #170.

A dedicated employee, Harold worked for the Grand Trunk Western Railroad as a car man in the car department for 20 years before retiring in 1987.

He enjoyed the company of others and visiting with his friends as he got out and about in town.

He was preceded in death by his parents and a brother, Floyd Peck.

A graveside service will be held at Poe’s Cemetery in Newberg Township on Saturday, September 19, 2020 at 2:00 p.m. Military Honors will be conducted by the American Legion Hice-Shutes Post #170.

Memorial donations in Harold’s memory may be directed to the St. Joseph County Commission on Aging or Hospice Care of Southwest Michigan. Envelopes are available and may be sent to Hohner Funeral Home in care of arrangements.