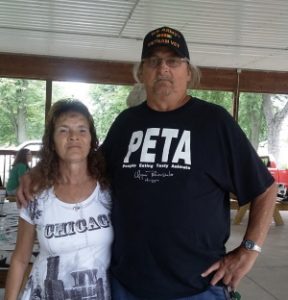 Michael Dean Hunter, Sr., age 68 of rural Fulton, died Tuesday, Sep. 22, 2020 at home surrounded by his family. He was born in Battle Creek on July 8, 1952 the son of Richard Lee and Helen Rosemary (Robinson) Hunter. He attended Athens High School before enlisting in the US Army and served in Viet Nam. He was married to Denise Roach on April 7, 1973 in Battle Creek. Big Mike was employed for 39 years at the Haas Corporation, which later became Lear Plastics and then International Automotive Corporation in Mendon. He earned his GED and later attended Kalamazoo Valley Community College and became a Millwright. He enjoyed trips to the cabin in the U.P., hunting, fishing, and riding his ATV. He was a knife collector who enjoyed toasting his buddies and spending time with his grandchildren.

A memorial service will be held at 2 p.m. Saturday, Sep. 26, 2020 at the Eickhoff Funeral Home in Mendon along the bank of the St. Joseph River. Memories will be shared by family and friends followed by military rites. Memories and condolences may be shared online at www.eickhofffuneralhome.com