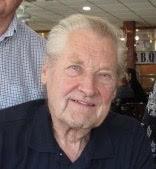 Andrejs Rozentals, age 84, of Three Rivers, passed away on October 5th, 2020 at home with his loving family by his side after a very short battle with cancer. He was born in Riga, Latvia the youngest of three children, to Ludvigs and Alisa (Meija) Rozentals. Preceded in death by his son, Gunars Juris Rozentals and older brother, Gunars Rozentals. Andy leaves behind his wife of 58 years, Ruta (Krinte) Rozentals, a daughter, Andra Anna Rozentals, his son, Valdis Andrejs Rozentals and his sister Dzidra Dagmara Apsite. Andrejs also left behind four beloved grandchildren, Lidija (Aija) Lillie, Andrejs, Zinaida and Zile Rozentals.

Andrejs’ family, as many families from Latvia did, fled from Communist Soviet Russia Occupation and settled in a small town in Germany. They later were in a displaced person’s camp called Ansbach. The family was sponsored by a generous family which allowed them passage to the US where they settled in Grand Rapids. Ruta and Andy knew each other as children in Ansbach but did not reconnect until many years later at a Latvian song festival in Indianapolis.

Andrejs started school, at the end of WWII, in Germany and continued his education in Grand Rapids. He graduated from Michigan State with a Bachelor of Science degree. Post graduation, Andy had several positions as an Engineer, most notably with Honeywell and Alliant Techsystems.

Andy spent most of his “free time” serving in the US Army National Guard & US Army Reserves and retired as the rank of LTC. This was a true passion of Andrejs as he actively served for 49 1/2 years.

Volunteering was very important to Andrejs as well, spending more than 20 years helping those in need preparing taxes in MN and MI with St. Joseph County COA. He lobbied in Lansing as a Michigan Senior Advocate Council advocating for elderly citizens.

As well as the many activities he was involved with, Andy loved spending time with his family, especially his grown children and grandchildren whenever possible. Andy was very disciplined and wise in many ways and always provided helpful advice.

The Latvian fraternity, Fr. Livonica that Andrejs belonged to originated in Latvia and Andrejs led the efforts in the US to continue the sacred traditions that included members across the United States. He was well renowned for his singing and dancing abilities within the fraternity.

In accordance with his and his family’s wishes, cremation has taken place. A memorial service will take place in the spring or summer of 2021, as the COVID-19 pandemic allows. Announcements pending.