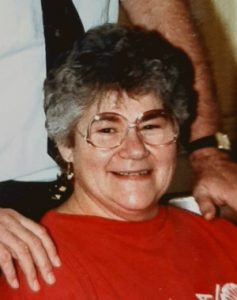 Beverly graduated from Dowagiac Union High School in 1951 and was recruited, via high test scores, to service with the FBI. When her mother died, she abandoned this dream, choosing to stay near her widowed father; Bev worked in Dowagiac as a telephone operator. January 24, 1953, she married Howard Marion Curtis. They loved dancing together, time with family and friends, and raising their children to be thoughtful, capable, and independent.

Bev and Howard raised five children while moving frequently across Wisconsin and Michigan for Howard’s career. They left dear GTE friends behind in Muskegon, Imlay City and Adrian. Once the kids were all in school, Bev worked for the General Telephone Co. Credit Union, earned an Associate degree and certificate in accounting (Summa Cum Laude) from Glen Oaks Community College, and had a 20+ year career at First National Bank in Three Rivers, including several years as an effective and well-liked branch manager. She and Howard loved traveling all over the US, including to Alaska and Hawaii, to Caribbean beaches and, extensively, in Germany and other European countries. For many years, they wintered at Brittany Estates in Sanford, FL.

To her family, Bev was the quiet, solid core: running a stable and loving home open to all, and facilitating/cheering-on their endeavors. From scouting helper, school room mother, music programs and sports fan, to sewing outfits, hosting parties, and chaperoning trips, Bev could be counted on. Though she could sing well and play piano, and was intellectually and artistically skilled, Bev preferred cheering from the audience. Since 1963, Beverly was an active member of the Presbyterian Church, serving as a deacon and honored with the Presbyterian Women’s Lifetime Member award.

Memorials may be directed, via Hohner Funeral Home, to Domestic And Sexual Abuse Services (DASAS) or First Presbyterian Church in Three Rivers.