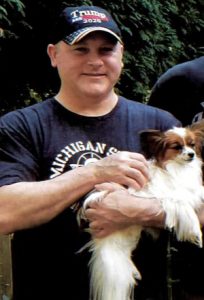 Brett’s nicknames growing up were “Silent Stranger,” “Packie” and, of course, “Bake.” He graduated from Climax-Scotts High School in 1990, where he participated in Football, Track and Band. He enjoyed kayaking, nature, animals, playing pranks, his family and friends and was a huge Superman fan.

Brett was a welder by trade and was employed at W. F. Wells and Armstrong International.

Donations in Brett’s memory may be made to St. Joseph County Animal Rescue Fund. Envelopes available at Hohner Funeral Home.