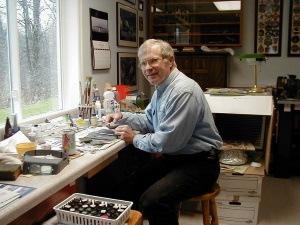 Clarence E. Wentzel of Kalamazoo, passed away on Thursday, October 15, 2020, at the age of 80, after losing his short battle with COVID-19.

Clarence was born in Chicago on May 30, 1940 to father Clarence Julius and mother Mary Bowen. He graduated from Constantine High School in 1957. It was there he met his wife Marcy. Following high school, he enrolled at Trine University (formally Tri-State) where he graduated with a BS in Aeronautical Engineering in 1960. He was hired out of college by Fisher Body and remained with General Motors for 38 years. His career at General Motors was expansive, encompassing both domestic and international operations. Despite his knowledge of cars, aircraft remained his first passion. As a life-long modeler he built both wooden and plastic airplanes and became very skilled and prolific, assembling numerous museum-quality replicas.

Clarence was a smart, kind and humble man who lived a full and active life. He traveled the world, learned foreign languages, loved to read, watch movies, work in his yard, jog and golf. One of his defining traits was his generosity, and he cherished most his time spent with his wife, other family and his many, many friends.

Clarence was preceded in death by his parents and by his brother Mike Bowen. He is survived by his wife of 60 years, Marcy Wentzel; children James Wentzel (wife Bernadette), Lee Wentzel (wife Cindy Kay) and Lisa Messina (husband Dominic); and grandchildren Irena Wentzel, Jason Messina and Daniel Messina.

People wishing to honor Clarence can donate in his memory to the Air Zoo in Portage, Michigan (https://kalamazoo-aviation-history-museum-dba-air-zoo.snwbll.com/imagine-inspire-ignite).

According to his wishes, cremation has taken place. Memorial services will be held at a later date. Arrangements were entrusted to Eley Funeral Home in Constantine. Online messages can be left for the family at www.eleyfuneralhomes.com.